In "Mystic Parallax," his searching new show at the FLAG Art Foundation in Chelsea (through November 14), Awol Erizku dives into the formative texts and icons of his own upbringing and emerges with a new personal mythology. In the process, the Ethiopian-born artist questions much of what he learned about art history as a student at Cooper Union and Yale; one of the show's sculptural assemblages features a charred copy of a book by one of Erizku's college professors (Flash of the Spirit: African and Afro-American Art and Philosophy, by Robert Farris Thompson), combined with a prayer rug and a wooden mask.

Fire figures prominently throughout the show, in a photograph of a bust of the Egyptian queen Nefertiti dissolving in flames and abstract works on paper made with burning incense, among other examples. The idea is not just to create a spectacle—something Erizku, whose pregnancy photograph of Beyoncé became an internet sensation in 2017, is certainly capable of doing—but to clear space for a new, less Eurocentric history of visual culture.

Overall the show, Erizku says, is about "denouncing my Western influences and embracing my Afrocentric side. For me it becomes an intellectual journey to find root in the origins of some of those ideas." 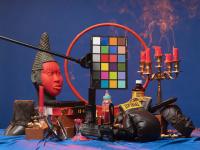