For much of his career David Hammons has shied away from conventional art materials and mediums, but while working in Los Angeles in the late 1960s he came pretty close to figurative painting—in his own innovative way, of course. During art-making sessions that doubled as performances, Hammons applied baby oil or margarine to his body (or the bodies of his friends and collaborators), pressing skin or hair against paper and then sprinkling powdered tempera paint over the imprints. In the finished "Body Prints," the addition of carefully chosen drawn, collaged, silkscreened, or assembled found objects—including American flags and, in one very memorable case, a door labeled "Admissions Office"—add to the works' uneasy sense of compression and help to place their fragmentary portraiture in the more specific context of the Black American experience.

"In a decade that was an inflection point for racial tension and racial justice in the United States, Hammons chose to use his own body to depict the quotidian joys and entrenched injustices of living as a Black man in midcentury America," the Drawing Center's director Laura Hoptman writes in the catalog for the downtown New York nonprofit space's just-opened exhibition of the Body Prints. "David Hammons, Body Prints 1968–1979" (through May 23) includes 32 examples from the series and is, surprisingly, the first exhibition to focus on it. An accompanying publication features documentary photographer's Bruce W. Talamon's mesmerizing 1974 shots of Hammons at work on the "Body Prints," as well as an insightful conversation between artist Senga Nengudi and gallerist Linda Goode Bryant (who reminisce about the making of the works and their exhibition at Bryant's legendary Manhattan gallery, and the subject of a forthcoming MoMA exhibition, Just Above Midtown).

Although the market-wary Hammons stopped making his "Body Prints" in the late 1970s after becoming alarmed by their popularity and saleability, they have since found their way into museum collections and become a touchstone for curators, collectors, activists, and, especially, fellow artists (the painter Keltie Ferris, for one, recently made her own series of Hammons-inspired prints). This show, not to mention the art world's overdue exploration of Black figuration and representation, should help them find an even wider audience. 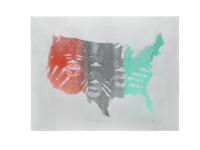 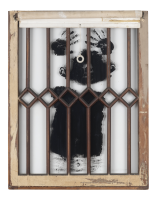