During his two decades of working for Life magazine, where in 1948 he became the first Black photographer to be given a staff position, Gordon Parks (1912-2006) covered the Civil Rights movement as both an observer and a participant. His images reflect not just the cruel rules and rituals of racism and segregation, but also the daily negotiations of people living under them. The first show in a two-part exhibition at the London gallery Alison Jacques, organized with the Gordon Parks Foundation, presents images from two of his published photo-essays. Black Muslims, a look at religious and political gatherings of the early 1960s, captures scenes of peaceful protest in New York and Chicago; Segregation in the South, photographed in Alabama in 1956, follows three Black families as they navigate a landscape of labeled drinking fountains and ice cream counters. Part Two of the exhibition, opening September 1, will show off Parks's gifts as a portraitist (of, in this case, the boxer Muhammad Ali) but Part One, which runs through August 1, is a chance to appreciate his keen eye for the strength and endurance that comes from a sense of community. 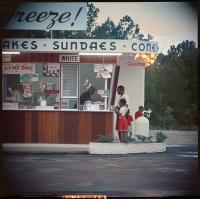 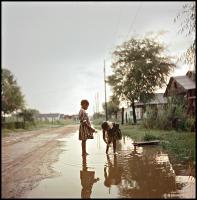