When she first emerged in the Bay Area scene of the late 1950s and early '60s, the painter Joan Brown was known for her thick impasto. (Among her close friends and contemporaries was Jay DeFeo, whose monumental painting The Rose was so densely layered that it weighed almost a ton). In the mid-'60s, however, Brown seemed to fall out of love with the physicality of paint. Her work from that point on embraced flatness and a pared-down, but symbolically rich, figuration influenced by Henri Rousseau and ancient Egypt, among other diverse sources.

A dozen of these colorful and mysterious canvases are now at Venus Over Manhattan (through December 23), in a show that includes loans from the di Rosa Center for Contemporary Art in Napa. Among the works on view are Grey Wolf with Red Clouds and Dark Tree (1968), with its confrontational lupine apparition and menacing landscape, and the more whimsical Woman Preparing for a Shower (1975), in which the main figure shimmies out of her polka-dot robe as a small, obedient dog waits nearby with a checkered towel.

Two other works reflect the fact that Brown was an accomplished swimmer, serious enough to train in San Francisco Bay with an Olympic coach. They show sleek, silhouette-like figures diving and doing the crawl, and invite us to see Brown's style of painting, for all its quirks, as a similarly disciplined and athletic effort. 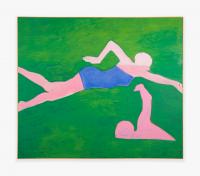 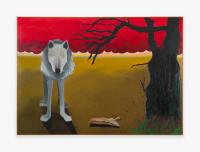 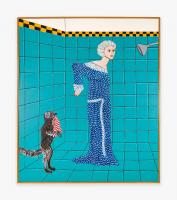 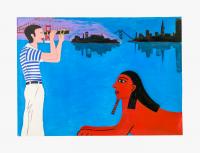 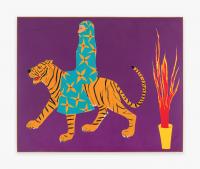 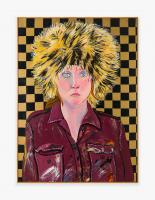