The artist Joyce Pensato, who died last year at 77, made bold paintings and drawings of popular cartoon characters in an aggressively raw and gestural hand. To look at these works is to see Donald Duck, Homer Simpson, and others as you have never seen them before: looming, intimidating, even menacing. (Pensato referred to some of her black-and-white paintings as "mug shots.")

A two-part show of Pensato's work has just opened at Petzel gallery, which recently announced representation of the artist's estate. "Batman vs. Spiderman," at the gallery's 67th Street branch, includes muscular charcoal drawings of these characters from the 1970s (when Pensato, frustrated by a still life drawing class at the New York Studio School, first started to work with cartoons).

At the Chelsea location on 18th Street, "Fuggetabout it (Redux)" restages a memorable installation from 2012: the entire contents of the artist's East Williamsburg studio, which she had had to leave after three decades upon losing a battle with her landlord. (When it was first presented, the piece was both a timeless immersion in an artist's process and a comment on the gentrification of North Brooklyn.) Also in the current show are paintings from Pensato's "Eyeball" series, which reduces the artist's favorite cartoon characters to pairs of giant, disembodied eyes and are just as powerful—and unnerving— as her more fully realized images. 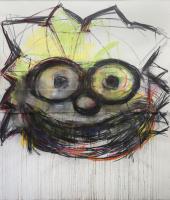 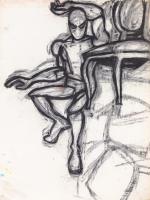 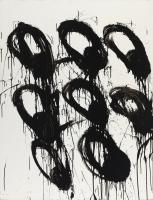