The Chicago-based artist and musician Lisa Alvarado complements her psychedelic painted textiles with the sounds of her experimental jazz group Natural Information Society, for which she plays the harmonium. In her current show at Bridget Donahue gallery on New York's Lower East Side (through August 29), she creates a dreamy, meditative environment with a specific purpose: to reflect on a painful historical episode that resonates into the present.

While an instrumental recording plays, visitors can wander around her double-sided hanging paintings and contemplate a separate body of photographic works, featuring archival portraits of people of Mexican descent who were deported from America in the 1930s as part of a sweeping "repatriation" policy. As Alvarado notes in the gallery's press release, the majority of them were American citizens and many later re-entered the country during World War II to work as farm laborers. The crossing and re-crossing of borders, psychic and political, is also hinted at in her show's title: "Thalweg," a term of international law defining a boundary between states that lies beneath water. What Alvarado is doing, more generally, in her free-associative art and music is making us question various lines of demarcation, including the one between mind and body. 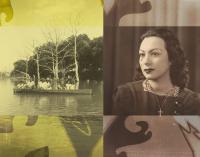 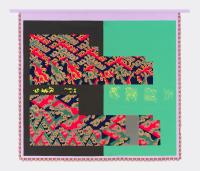 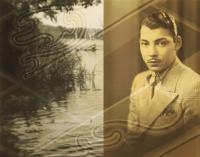