The late painter and Underground Museum founder Noah Davis once opined that the art world is reluctant to engage with anything approaching spirituality. Zoé Whitley, the Chisenhale Gallery director who organized the themed section of the current Frieze Viewing Room, seems to have taken that statement as a challenge. In "Possessions," she assembles a diverse group including artists who make objects as part of a larger spiritual practice as well as those who approach the theme more obliquely or critically.

At one end of the spectrum is the South African "sangoma," or healer, Buhlebezwe Siwani, whose paintings with soap, pigment, and resin on handwoven fabrics (shown by the Portugese gallery Madragoa) relate to rituals around hygiene and cleansing. At the other is the Canadian video artist Vera Frenkel (at Georg Kargl Fine Arts of Vienna), whose 1990/91 video This is Your Messiah Speaking links consumerist and religious drives.

Other highlights include the Mumbai-born, London-based artist Prafulla Mohanti, who has been staging painting-performances rooted in Tantra since the 1960s and is showing luminous abstractions at Jhaveri Contemporary, and the photographer Lucia Koch, whose shots of empty, windowed storage spaces (at Christopher Grimes Projects) suggest makeshift chapels. Look for hints of the theme in other areas of the fair as well, such as Drawing Center Executive Director Laura Hoptman's "Spotlight" section of Frieze Masters, where Rubem Valentim's abstract paintings based on Afro-Brazilian deities can be found along with the cigar-band collages of the self-declared healer Felipe Jesús Consalvos. 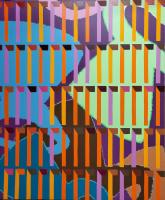