As older monuments all over the country are coming down, a forward-looking new one is going up at Socrates Sculpture Park in Long Island City. The long-planned but extremely timely exhibition "Monuments Now," with specially commissioned works by the artists Jeffrey Gibson, Paul Ramírez Jonas, and Xaviera Simmons, is unfolding sequentially in the park beginning with Gibson's contribution on July 10.

It will be impossible to miss the brightly colored, hypnotically patterned ziggurat devised by Gibson, a 2019 MacArthur "genius" grant honoree who is a member of the Mississippi Band of Choctaw Indians and of Cherokee descent. Building on his signature banners, flags, and posters, which often address the public with exhortatory texts, this new multi-media project, titled Because Once You Enter My House, It Becomes Our House, pays homage to both the queer and Indigenous communities. It combines forms derived from pre-Columbian earth mounds and architecture, abundant surface decoration, and live-streamed performances atop the structure, reimagining the idea of the static sculptural monument as an extended, diverse, celebratory experience.

In an interview with Artful's Editorial Director, Gibson spoke about finding inspiration in historical Indigenous cities, channeling the energy of contemporary activism, and what he thinks we should do about famous monuments such as Mount Rushmore and Manhattan's statue of Christopher Columbus. 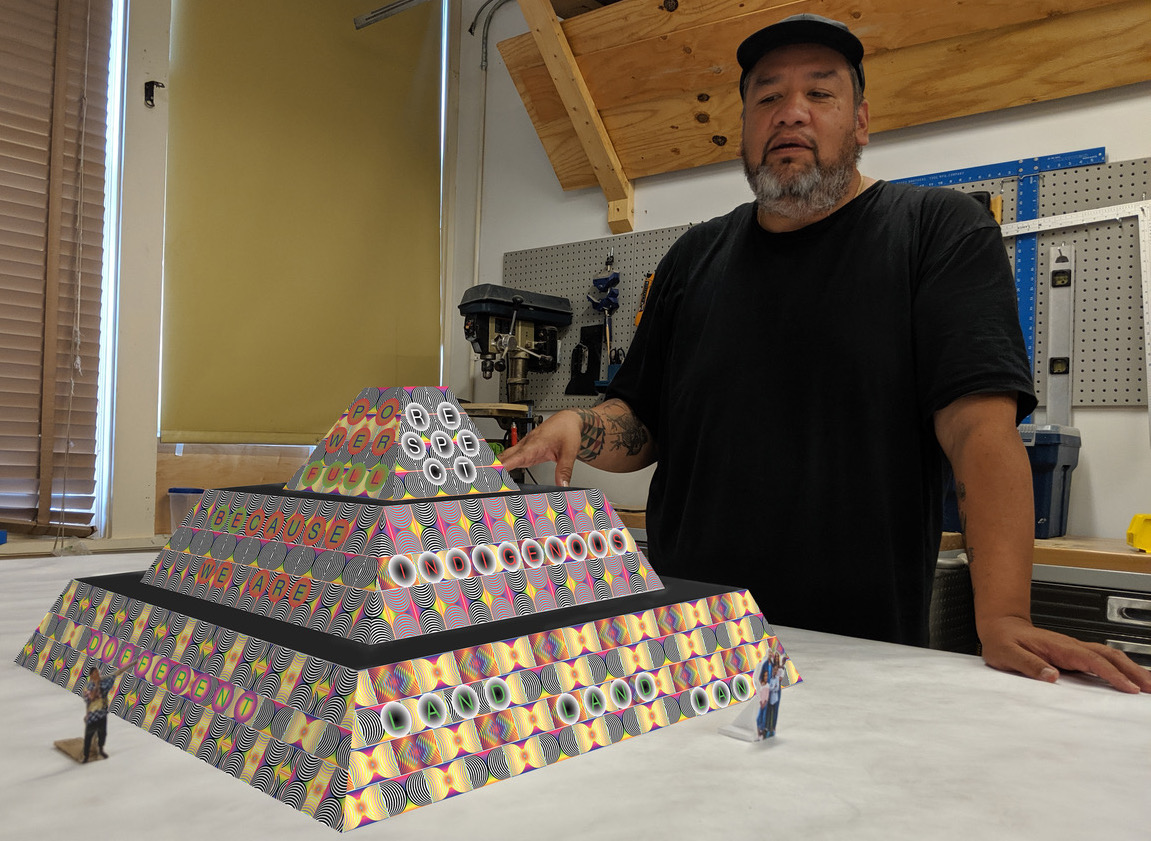 Jeffrey Gibson in his studio with a model of Because Once You Enter My House It Becomes Our House; 2020; Courtesy the Artist, Socrates Sculpture Park, Sikkema Jenkins & Co., New York; Kavi Gupta, Chicago; Roberts Projects, Los Angeles.

Karen Rosenberg: The question of what to do about some of our monuments is very much in the news right now. But this is also an issue that's been with us for a while, and shows such as the one at Socrates take a lot of planning. How and when did you come up with your monument, and how it has evolved?

Jeffrey Gibson: It was about a year ago when the show's curator, Jess Wilcox, invited me to do the project. By the time there was a national movement to take down monuments, we were already well into confirmed plans for my piece. It had been sitting in my mind for some time to work with the architecture of a Mississippean culture mound. The idea of somehow activating the structure with performances was also there in the beginning.

KR: What were some of your formal and historical sources of inspiration? You've made references to the earth mounds of the ancient city of Cahokia, in what is now Illinois, and the pre-Columbian ziggurat.

KR: Were you also thinking about the history of the land that is now the sculpture park?

JG: Yes. My relationship to land is that I always feel like a trespasser, I always feel like a visitor. I also see the positive intentionality of what has happened over the past thirty years. But as an Indigenous person, those thoughts always end with, "But this was Indigenous land." You sit back and you try to imagine what it may have looked like, how people may have lived, what people's languages sounded like. It's a mix of feelings that I have never been able to reconcile in my mind. How do I make those two things make sense? And I'm not even sure that that's the right direction for my thinking, because I also understand that things change. This is where we're at—what is it that you can do now?

Right now, there's a collective energy and movement that I think you would have to be blind or deaf to not see and acknowledge. The need to collaborate with people, and be a platform to highlight them, has become an increasingly important part of my practice. It's not comfortable for me to be one of the handful of Indigenous artists that people are familiar with. I would be far more comfortable being one of many Indigenous artists who are in the Whitney collection, or doing exhibitions at galleries in New York City.

KR: One of the ways in which you're becoming a platform, collaborating with other artists, is the program of performances you're organizing around the monument. Who are the performers, and how did you choose them?

JG: All three of them are comfortable being identified as Indigenous Native performers. I know we all carry our tribal affiliations as part of our biographies, and that was important to me. I have followed these three artists for years, because they have maintained cultural tradition and lineage—paying attention to their role as individuals in relationship to community, and also acknowledging the land or the history of the space. Raven Chacon is an amazing composer of everything from really aggressive music to poetic, soft sound. His sound always makes me pay attention to the space I'm in—I hope he turns the whole structure into an instrument, performing from the interior. Laura Ortman is a classically trained violinist, but she'll go from this whisper of wind chimes to really hardcore punk, playing like she's going to saw her violin in half. Emily Johnson is a choreographer and dancer originally from Alaska. She's been heavily involved in protests for the past couple of months—all of the performers have been active in protests, and I wanted to give them time to allow this cultural moment to be part of their work. I tried to make a structure that could support that.

KR: How will the performers interact with the monument? Will they use it as a stage?

JG: It has a steel armature on the interior, so it can handle hundreds of pounds per square inch—you can have a choir on it. Each level is seven feet high and four feet deep. So even with social distancing, we figured we could have twenty-six to twenty-eight people on the structure.

KR: What is the significance of the texts on the surface? Do they have a relationship to activism?

JG: I tried to choose texts that people could project onto--that those words are about you at that time when you're reading them or looking at them. They'll make you think about someone you've lost, or someone you love, or what makes you feel safe, or what makes you feel strong. I also chose texts that speak specifically to the protests regarding police brutality and Black Lives Matter and also to missing and murdered Indigenous women. I've used the text "IN NUMBERS TOO BIG TO IGNORE" in the past, to acknowledge missing and murdered Indigenous women. And "THE FUTURE IS PRESENT" is a statement about projecting some of our current idealism into the future.

I think the texts are important, but the ziggurat almost serves as a Speaker's Corner. Even if it's a small audience, it's important that this structure somehow gets married to that content—in the form of queer performance, or gospel singing, or traditional Apache violin, all of those things that have historically been on the periphery. It's evidence that these voices have existed, that they do exist now.

KR: Of the contested monuments that are currently in the news, are there specific ones you have been thinking about?

JG: I'm really interested in seeing what happens to Mount Rushmore. I went there a few years ago, actually to go see the Crazy Horse Memorial in progress next to it. Mount Rushmore is a very powerful image, and those kinds of images have taken my speech away at times, they have taken my breath away because I don't really have words to rectify the history, or words to really acknowledge how they make me feel. You develop a kind of numbness to it. I can think of a number of pieces that I've produced over the past ten years that have been about the kind of numbness that you acquire in order to move through the world and not feel pain from every monument, from every billboard, from every mascot, from every erasure of your history.

KR: What do you think should be done with these monuments? What would you like to see done with Mount Rushmore?

JG: For me, I decided that rather than numbness, I'm just going to put my energy in the direction of what it is I'd like to see. I've always been an advocate of funding monuments that celebrate different histories. Let people see themselves in the monuments that are nationally embraced. And let us not see ourselves as subservient. Let us not see ourselves as weary or disempowered or shackled or saved. Let us control our own representation. I have never understood why that is so difficult to find support for. How do we get those monuments funded? How do we acknowledge the people of this land in a way such that every person walking across this land can tell you who those people were? I have stopped paying attention to the other monuments, and whether that's right or wrong that is where my brain has been for more than a decade.

KR: So it's a question of being more forward-looking, ignoring the divisive monuments and putting energy and resources into creating new ones?

JG: I suppose. I was asked by the Museum of Arts and Design back in 2000, and sometime later on, to think about something that I would like to do. My proposal was about the Christopher Columbus statue in Columbus Circle—I wanted to craft these large beads and drape them around his neck until just his eyes peeked out over a massive pile of beads. It related back to the story of Manhattan being traded for a string of beads.The museum thought I was completely ridiculous. We had a conversation about how this was never going to happen, how Italian Americans were never going to stand for it, how it was kitschy and campy and didn't speak to the seriousness of the topic of colonialism. I remember saying, it's about the unexpected response to a monument like that. I thought it was great. But it didn't happen.

So when these monuments are coming down, I say, "Give them to me! Let me do something with them." They have existed and they have influence and they have impacted who we are today, so even in their taking-down, they're still present. Even if they're at the bottom of a lake, or they've been pulled down or painted over, they're not gone. For me, the goal is to transform them and shift their narrative.

KR: What would you ideally like to see happen with your monument? Do you envision it having a permanent life and permanent home, and if so where?

JG: With the steel armature it can be taken apart and reassembled, and it will travel to the deCordova museum in 2021. That area has had a lot of communities that dipped in and out of sixties and seventies idealism and attempted to embrace a kind of New Age Indigenous spirituality. I'm going to rethink the posters and how the structure can be used. So that will be its next life, and who knows—maybe it will have another life after that. I think it's important that it has a few lives. 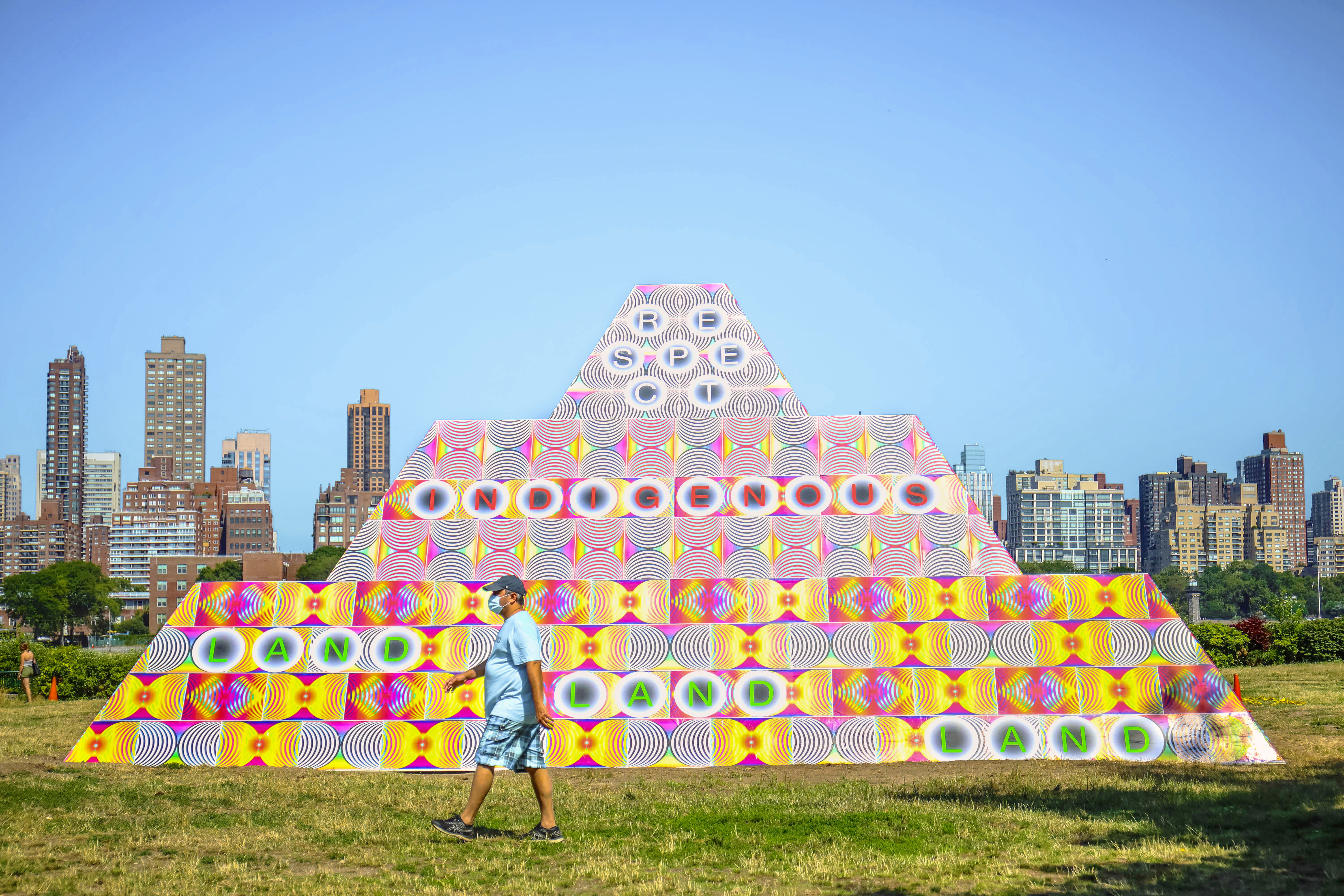