Beverly Buchanan (1940-2015) was not a self-taught artist; she studied at the Art Students League in New York with the great Abstract Expressionist painter Norman Lewis, among others. But a deep admiration for those who made art without formal training, and often in difficult circumstances, runs through her work. She is best known for her “shack” sculptures, little constructions of scavenged cardboard, wood, or foam core inspired by the vernacular architecture she had seen growing up in rural North Carolina and on later travels through the South. “I want to give people who can neither read nor write but made all the measurements and built their own barns and shacks a different way of looking at themselves,” she once said.

Several of those “shacks” are in an exhibition at Andrew Edlin gallery in downtown New York, “Beverly Buchanan: Shacks and Legends, 1985-2011" (March 20 through May 1), along with some of the “legends” or texts Buchanan wrote to tell the stories of the shacks’ inhabitants. Also in the show are other assemblages and drawings that pay homage to the Black Southern tradition of “yard art” and to self-taught artists such as Thornton Dial and Nellie Mae Rowe.

Attesting to the resonance of Buchanan’s work today, the gallery is also showing an installation by the contemporary artist Abigail DeVille; titled Homebody and inspired by Buchanan, it connects the shacks to a Bronx apartment inhabited by four generations of DeVille’s family and to the broader history of the Great Migration. 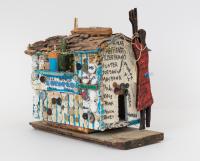 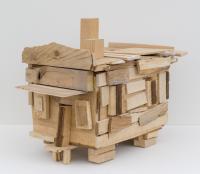 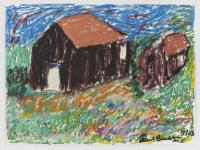