Early in his career, Cory Arcangel tweaked the code in video-game cartridges to create clever works such as Super Mario Clouds (2002), in which he removed every element of the game except the blue sky and drifting clouds of the background. In his new show at Greene Naftali, and a related interactive website, he makes similarly sly interventions in social media platforms (and a newer video game) with the help of AI, or Artificial Intelligence.

Most of the works highlight the commercial and dystopian potential of AI, especially as it intersects with big social media platforms and the companies and influencers that populate them. In one work, two bots play chess with each other by noting their moves in the comment sections of public Instagram accounts. In another, Arcangel programs a different bot to attach itself to various corporate social media accounts and “like” every single post (this piece may mimic real social marketing manipulations a little too closely, or maybe even evoke more nefarious political machinations involving armies of bots). And in a more ambitious work, he creates a custom computer to act as an unpredictable player in “Kim Kardashian: Hollywood,” the influencer’s video game about aggressive fame-seeking.

The gallery presentation and its online viewing room include works on paper exploring clickbait, virality, and provocation in the digital realm; in one of these series bits of introductory text that appear in many Twitter posts are printed on air-sickness bags collected from the artist’s travels (he splits his time between Brooklyn and Stavanger, Norway.) Many of the AI works, however, can be accessed via a website Arcangel has created for the exhibition. 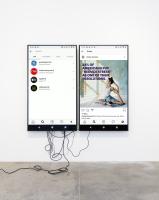