The contemporary photographer and activist Zanele Muholi has drawn global attention to South Africa’s LGTBI community in vibrant portraits and self-portraits, some of which are in an acclaimed exhibition at Tate Modern (now closed due to the city’s shutdown but scheduled to run until the end of May.) Further context for Muholi’s works can be appreciated right now, however, in an exhibition the artist organized as an homage to their mentor, the South African photographer and chronicler of life under apartheid David Goldblatt (1948-2018).

“David Goldblatt: Strange Instrument,” an exhibition at Pace in New York through March 27 organized in collaboration with Yancey Richardson Gallery (which represents Muholi), reflects a long friendship that began in 2000 when Muholi enrolled at the Market Photography Workshop in Johannesburg (a school founded by Goldblatt to provide art training and opportunities to students disadvantaged by apartheid). The show’s title comes from Goldblatt, who in a 2018 interview with Art21 called the camera a “strange instrument” that “makes it possible for you to enter into worlds, places, and associations that would otherwise be very difficult to do.”

Working with images from the 1970s and ‘80s, Muholi has organized a show that emphasizes Goldblatt’s apartheid-era images and also serves as a kind of curator’s autobiography. The photographs document the climate in which Muholi grew up, a climate in which a Black photographer such as Muholi would not have had the same access to subjects as Goldblatt and other white artists. An image of a segregated beach, with signs denoting areas for “whites only” and “all races,” makes this explicit, while many portraits—some of subjects who remain anonymous, others identified in captions—show people going about their lives within this system of violence and discrimination.

Along with conveying an affinity between two empathetic South African artists of different generations, this tribute show is an example of Muholi’s “visual activism.” It reminds us that the subjects of Muholi’s own portraits, some of them the victims of hate crimes, are still living under threat. 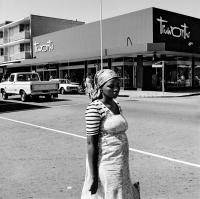 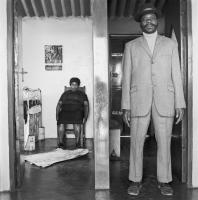 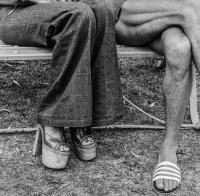 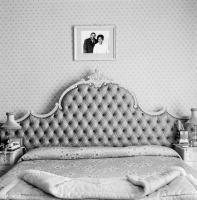 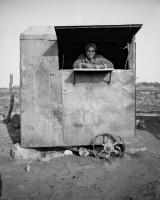