Dancing Into the Apocalypse: Eric Fischl on His New Paintings About America in the Age of Covid

"All artists have rules about what it takes to make something into a finished work of art," says the painter Eric Fischl. Over the last year, like many others living and working under the strain of the pandemic, the artist known for his socially and psychologically perceptive scenes of contemporary life found himself abandoning his own rulebook. As he worked through the isolation of quarantine in his Sag Harbor studio, loosely defined landscapes of sea and sky replaced the detailed bourgeois settings he had painted for decades. Tense and brooding suburbanites, like the characters in his previous series "Late America," gave way to new, more archetypal figures of ecstatic dancers and looming giants. The paint handling was different too, freer and more spontaneous.

Looking at these uninhibited new canvases, Fischl thought back to a film he had seen nearly a decade earlier, Lars von Trier's Melancholia (2011), about a wedding party's attempts to carry on with life as a planetary collision threatens to wipe out all of human existence. The idea behind the movie had initially struck him as implausible and deeply troubling. Suddenly, in 2020, it made sense.

Back in September, Fischl gave Artful a look at this uncharacteristic body of work as it was still developing in his Sag Harbor studio. The finished paintings are now on view at Skarstedt in New York, through December 13, in the solo exhibition "Eric Fischl: Meditations on Melancholia." Below, Fischl discusses some specific works from the series. 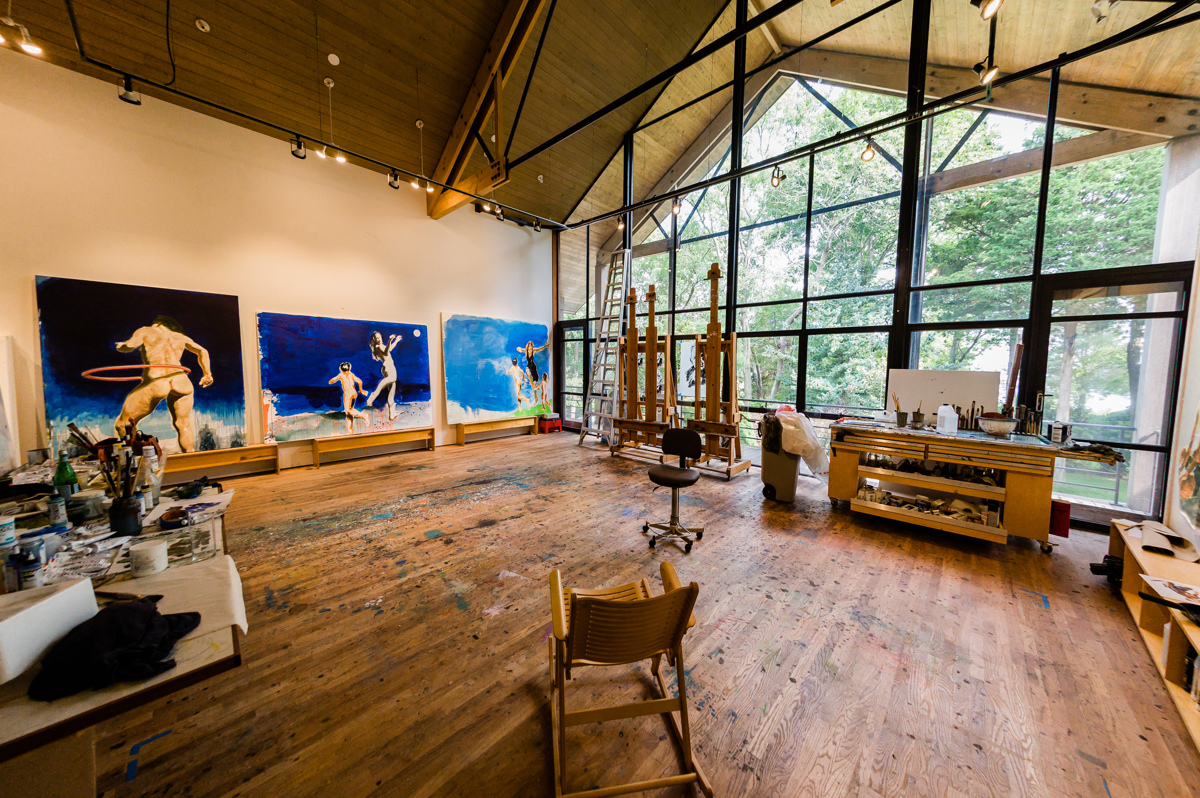 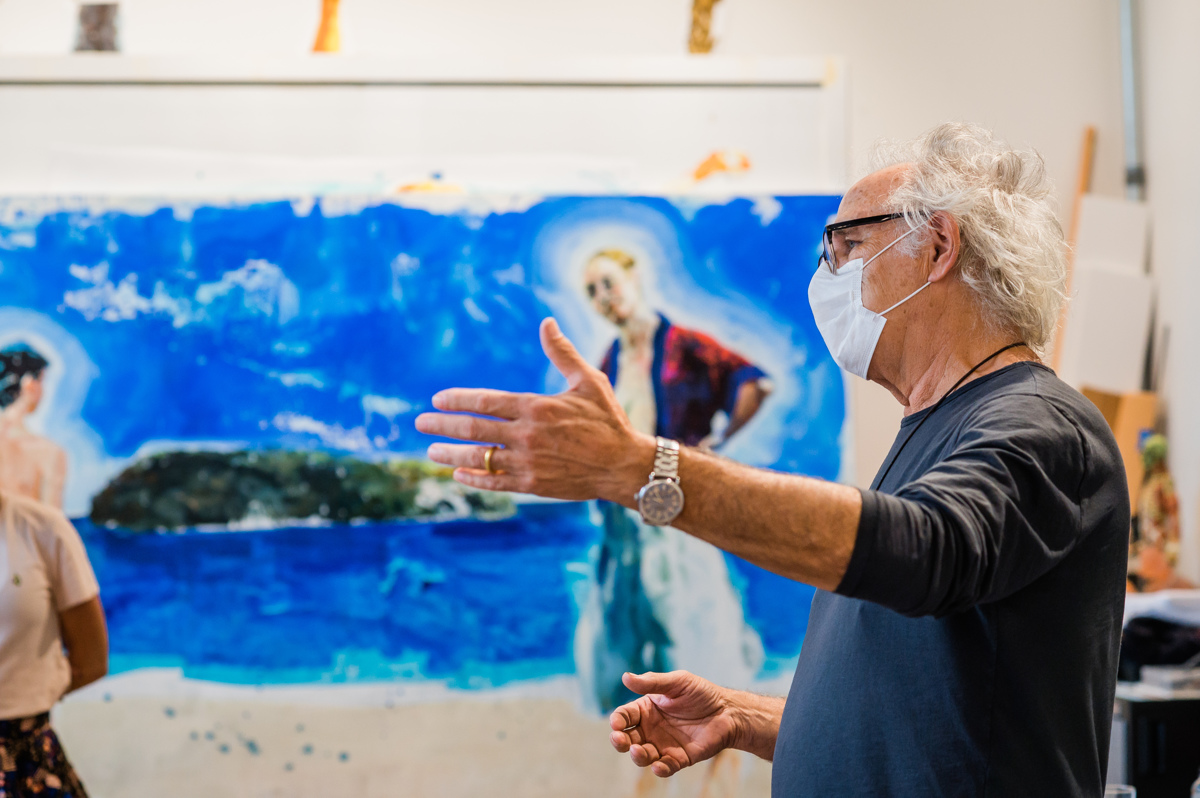 "My works are fictions. The people depicted are like actors playing roles. The actual people come from photos I've taken over the years. Their look, their style, their body language, captures my gaze. They interest me before I know why. Painting them helps me explain what it was that first transfixed my gaze.  Just know that in my paintings none of what is depicted was simply captured. It was all constructed. In real life, these people depicted don't know each other, weren't in the same place at the same time. Even the landscape is fiction." 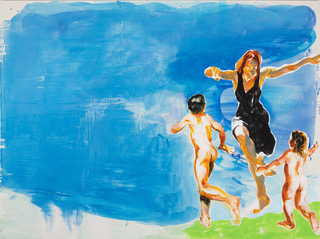 "When the movie Melancholia by Lars von Trier came out, I struggled with what I thought was an immoral and absurd premise: That in the face of the inevitable and certain destruction of everything, we would still go about our business as if there was going to be a meaningful future. Why would anyone get married knowing that in a few days our planet was going to be completely destroyed?  And yet now we find ourselves within the believable reach of just such an outcome: the collapse of our ecosystem and our moral law. This moment, this last year, has brought together a trifecta of destructive forces that make the hope of a positive and healthy future more uncertain, more unlikely than it ever should have been allowed to become.

"So I find myself in the later stages of my life and in a moment of terrifying confusion about how to heal the country, reshape the future, save everything that is meaningful to me, not doubling down on my rules about what it takes to make a great painting but letting it all go—and even more surprising to me, allowing myself to have fun with paint. Sometimes the bravest thing you can do is not care." 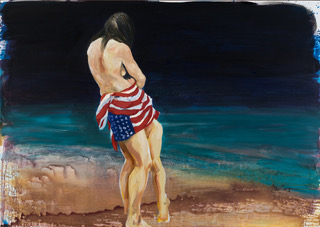 "I don't have children so I haven't had to face the dilemma of how to parent or protect my innocent child from the terrors of the moment and the profound uncertainty of our collective future. What could I say to them? How could I conceal my own terror, my own feelings of helplessness? Late America 2 depicts a woman hugging a child whose back is turned away from the darkness. The woman has wrapped herself and her child, pareo-like, in an American flag. Though I wasn't thinking about it at the time I painted my earlier work Late America, the movie, Melancholia, has the father abdicate total responsibility for trying to protect his child by killing himself. The mother creates a fantasy of a magic house made of twigs that she and the child can sit in when the planets collide and they will be saved. So in Late America you can see the cowardly and irresponsible father-figure unwilling and unable to help the child and in Late America 2 the mother trying, probably in vain, to protect her child from the complete darkness that is about to envelop them." 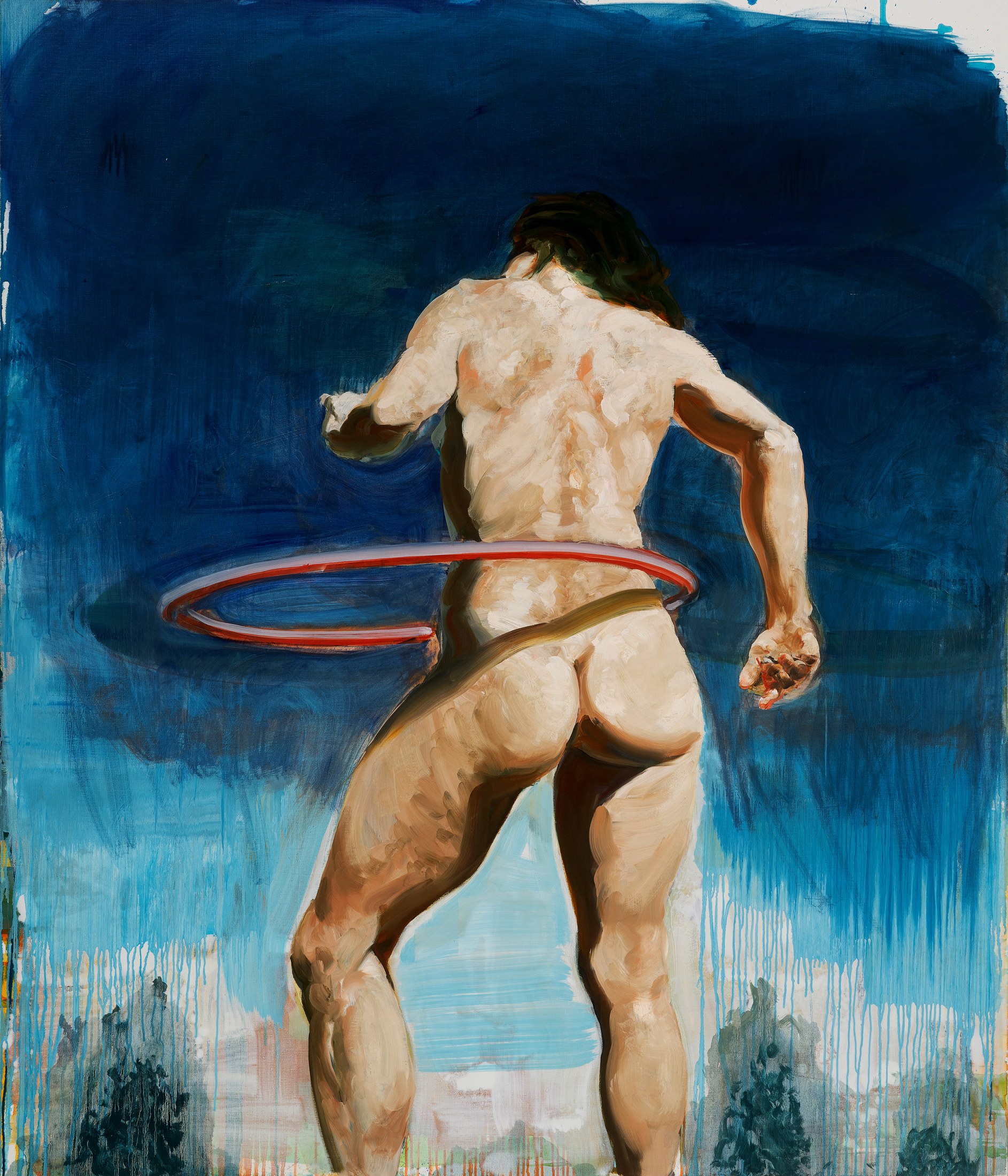 "Every work of art I've seen is in the back of my mind. Sometimes, as with American Hula, it moves to the forefront as an affirmation of what I have just done. There are two artists I admire that have painted giants; Goya and Courbet. Goya painted the giant as a menacing fearsome male and Courbet as a sensuous female.  I guess American Hula conflated them." 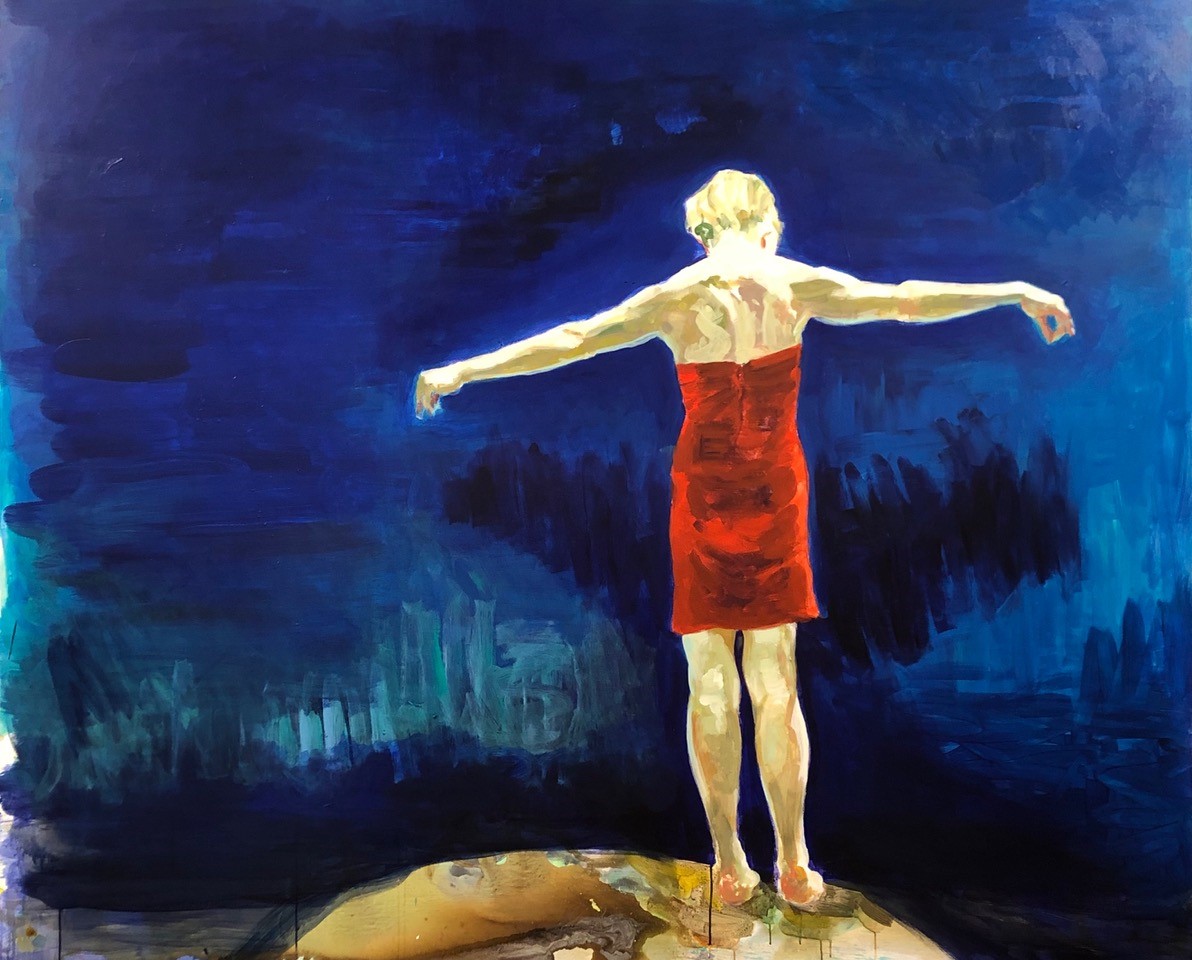 "I spent the summer watching fledgling ospreys grow and mature. There is a point shortly before they actually do take flight that they stand on the rim of their nest and flex and flap their wings. It is a kind of pantomime they do as a way of developing the courage to jump. The young woman depicted in Terminus reminds me of that. She looks below into a void of indeterminate depth, her arms outstretched for balance and/or a swan dive. She stands on the very rim of a small and grotty piece of earth. Is this all that remains? Where do we go from here?"