"Inside the Met" on PBS

When the cameras started rolling in 2019 for PBS’s three-part documentary “Inside the Met,” the museum was gearing up for what ought to have been a triumphant 150th anniversary. An exhibition commemorating the occasion, “Making the Met,” was in the works; there were plans for galas and a suitably impressive birthday cake.

Then came Covid, and “Inside the Met” became a film about coping, not celebrating. Toward the end of part one, which is titled “The Birthday Surprise,” we see a masked curator checking on an installation "frozen in time" in darkened galleries; the staffer who was entrusted with baking the museum’s birthday cake eats a lonely slice at home, on a video call.

In part two, “All Things to All People?”, the museum reopens—with a host of pandemic restrictions and, following the killing of George Floyd, a new urgency around social justice. We see the museum through the eyes of visitor Tracy-Ann Samuel and her two daughters, who search the galleries for any representation of figures who, like them, are Black and female. (They don’t find much in the American Wing, although their efforts prove more fruitful in the Great Hall where paintings by the gender-fluid Indigenous artist Kent Monkman have been installed.)

Part three highlights the ever-present need to raise funds and donations (or, to paraphrase museum president and CEO Daniel Weiss, to get the art from the East side of Fifth Avenue, where many wealthy collectors live, over to the West side.) As reviewers have pointed out, this part of the movie shies away from some of the tougher issues around cultural philanthropy right now and sometimes feels like a pledge drive. It does, however, give us a fascinating look behind the scenes where conservators reveal hidden underpaintings or stitch up fraying textiles—labors that, as this episode’s subtitle reinforces, require both “Love and Money.”

Watch a preview of "Inside the Met" and see images from the film below: 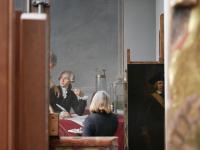