Since the 1960s, the San Francisco-based artist Lynn Hershman Leeson has been making unnervingly predictive art about the different ways in which technology intersects with the human, and specifically the female, body. Cyborgs, medical imaging, DNA, and artificial intelligence all figure in her uncanny and deeply researched work, which has been attracting more and more attention since a 2014 traveling retrospective at the ZKM Center for Art and Media in Karlsruhe, Germany.

“Lynn Hershman Leeson: Twisted,” at the New Museum—the artist’s first museum solo in New York—covers it all from her 1960s “Breathing Machine” wax sculptures accompanied by cassette-tape soundtracks to an ongoing multimedia installation, The Infinity Engine, inspired by a genetic-engineering lab. It includes long-term projects that slip from the physical to the digital world and back again, as with Leeson’s decades-long performance/persona Roberta Breitmore, for which the artist initially appeared in character and later created an online avatar.

Also in the show are very recent collaborations with scientists and researchers that almost seem to be ripped from our pandemic-era headlines. If some of Leeson’s earlier works have a dystopian cast, these newer projects highlight the problem-solving aspects of technology. In one work, Leeson worked with Dr. Thomas Huber at the pharmaceutical firm Novartis to create synthetic antibodies; another, created with bioengineering experts at the Wyss Institute at Harvard University, explores new water purification systems. As Leeson recently told Artforum, “For me, we’re at a point where artists have to pay attention and use our methods of intuition to work with specialized experts to create ways that our planet could be healthier and survive.”

Below see highlights from the exhibition, which runs through October 3. 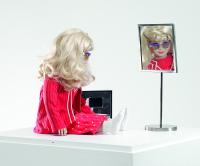