London’s museums remain closed until mid-May, but as of last week the city’s galleries are once again open for the first time in four months. Among the many worthy offerings is the well-known sculptor Rachel Whiteread’s exhibition at Gagosian Grosvenor Hill, which marks a new direction in her work.

Whiteread is famous for her ghostly plaster casts of furniture and architecture, which seem to flip rooms and objects inside-out; they have been described as “minimalism with a heart,” and have made for deeply moving public artworks (as with her Holocaust memorial in Vienna).  In this exhibition, which is on view through June 6 and titled “Internal Objects,” she tries out a new technique: piecing shed-like structures together from scraps of wood and metal.

Although these sculptures are painted white, giving them some resemblance to her signature casts, they appear far more permeable and precarious (as, perhaps, befits this not-quite-post-pandemic moment). Sheets of corrugated metal peel away to expose wire mesh; planks splinter and branches jut out at odd angles. According to the gallery, the artist was inspired to make these works while reading John Steinbeck and driving through the Mojave Desert and Death Valley; echoes of hardscrabble lives and uninhabitable landscapes suggest that although Whiteread has changed her sculptural vocabulary she is still interested in spaces that are, in one way or another, haunted. 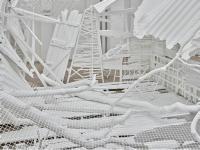