At the Luss House

Last fall, the art and design fair Object & Thing and the galleries Blum & Poe and Mendes Wood DM teamed up to stage an intimate exhibition at Noyes House in New Canaan, Connecticut. There, site-specifc works and other interventions showcased the mid-century modern architecture of Eliot Noyes. Now, in time for Frieze Weekend, the group is holding another event at the Luss House in Ossining, New York, the former home of architect and designer Gerald Luss.

On view by appointment, “At the Luss House” showcases the cantilevered two-story home of the architect noted for the modular system he designed for the interiors of the Time-Life Building in midtown Manhattan. (Fans of “Mad Men” may recognize that building as the series backdrop, and the town of Ossining as the home of Don Draper.) Some of Luss’s furniture designs, including a chaise lounge, a poker table, and several transparent acrylic and metal clocks, are also on display in the house, which features a mix of glass, stone, concrete, and several different woods.

Some of the artists who were featured at the Noyes house, including the sculptor Alma Allen, the painter Lucas Arruda, and the ceramic artist Frances Palmer, have returned for this edition; names new to this event include the painters Cecily Brown, Matt Connors, and Marina Perez-Simão.

Appointments are limited (Fridays and Saturdays only, from May 7 through July 24), but as with the Noyes House collaboration, “At the Luss House” can also be seen on the Object & Thing website in photographs by Michael Biondo and, starting on May 10, via a video tour (which includes commentary from the 94-year-old Luss). 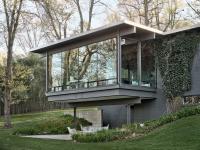